I love fishing with my kids. It is something that I couldn’t wait to do before I had kids. But I have to admit something.

As fun as it is it can be equally frustrating.

If you have been out fishing with your kids or grandkids then you know how it goes when it comes time to cast the line.

Tangles, hooks stuck in things and sometimes people on the backswing and usually the bobber ends up two feet in front of them.

It was with great excitement to try out the Rocket Fishing Rod that takes all the frustration out of casting.

Let’s go through the whole experience of using this rocket fishing rod so you can see if it is worth it.

How Does It Work?

The first thing you notice about the Rocket fishing rod is that it looks like a gun rock fishing rod. Or, to be more precise it literally looks like a shotgun with the stock sawed off!

It’s pretty ingenious, though. Instead of winding up to cast, all you have to do is shoot one of the special bobbers out of the barrel just like a gun.

The bobbers look like capsules and contain the hook inside. As soon as the bobber hits the water, it opens up and the hook is released.

Pump the barrel and aim it where you want it to go. It can launch the bober up to 25 feet. I know my 6 year old is not getting that far!

With a line stop over the bobber, you can set the depth of the hook however you like it.

Then just wait for the jerk on the other end of the line.

Can It Be Used In Salt Water?

This Rocket fishing rod definitely can be used in salt water as long as you are not going for big fish. Since the line is 8 pound test, it is best suited for pond fishing for crappie, bluegill or sunfish.

If you do want to fish in the salt, you could definitely take it out for smaller pickings like mackerel, porgie or harbor pollack. In and around a pier is probably the best place to use it in the salt.

Remember that this is a rock fishing rod for kids to use. Even though it is easy for them to cast, it is still not meant to handle fish that are going to put up much of a fight.

With that in mind it can be a lot of fun even in the salt, but don’t expect to be fighting stripers or snook with it.

Does It Actually Work?

This is the question of the day. Is it worth it?

Let me highlight the features that are really nice first.

It is easy to load the bobber and set the line stop to control the depth. Some adult supervision might be needed to make sure the hook is being inserted safely, but most kids over 5 should be able to do it themselves.

The instructions that come with it are very easy to follow so setting it up is not difficult.

Here are some of the things that are basically disappointing.

Reeling it in is not very easy as it is not a traditional reel set up. It’s a little too solid and doesn’t flow easily. No big deal there as I didn’t expect it to be a Penn or anything. The problem lies in tangles. As the child reels in it has a tendency to tangle.

If you don’t catch anything for a while, you have to reel it in to check which can get quite annoying.

I think the worst complaint I or anyone else has is the construction is shoddy.

It is not solid. If your child drops it, which let’s be honest is 100% guaranteed, there is a good chance it will break. And since this is not a traditional rock fishing rod, it isn’t likely to be fixable.

There aren’t really any other gun fishing poles out there that launch the bobber and all so you don’t have to cast it. 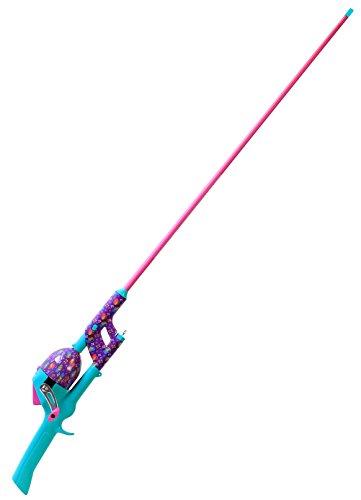 Though this isn’t as easy to cast as a gun launcher rod, it is still great for kids, especially if they are over 6 or so. The reel has a push button and the line goes inside the pole so it is less likely to get tangled or cause any bird’s nest when casting.

All they have to do is let it rip and press the button to set the line in motion. They may not have the best aim or toss it through the breaking surf line, but chances are they will be able to get the hook in the water by themselves at least.

Though it isn’t tangle free, this kids rod by Shapkespeare has the same push button release for easy casting for kids. It may get tangled, though as the line runs through a guide on the outside rather than inside a hollow tube.

With a finger rest under the reel, kids are able to get a firm grip. Highly recommended for fishing with kids.

Is It Worth It?

If you can manage your expectations and not expect a serious fishing rod then you will likely be satisfied. It is supposed to not be a toy, but unfortunately does come across that way.

It is fun for kids to use when it works, which unfortunately is not often. I wouldn’t necessarily say you shouldn’t get it, but don’t run right out. I think those other two rods I linked to will provide more hours of fishing enjoyment.

If you have any questions leave a note in the box below!

Get a FREE Guide to Fish Finders

0 shares
Special offer for our visitors

Get Your Free Guide on Kayak Fishing

We will never send you spam. By signing up for this you agree with our privacy policy and to receive regular updates via email in regards to industry news and promotions